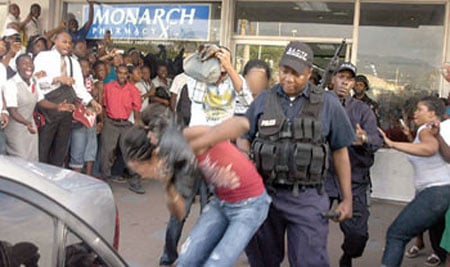 Gareth Henry, one of three gay men who were surrounded by an angry mob outside a pharmacy one year ago today in St. Andrew, Jamaica, is seeking refugee status in Canada.

CBC reports: “Henry says 13 of his friends have been killed in Jamaica since 2004. One 22-year-old friend who was suspected of being gay was chased by a mob, Henry told CBC News. The only place he could run to was the harbour. He couldn’t swim. ‘Everyone,’ said Henry, ‘stood and watched him drown.’ Henry, who was vocal activist with the country’s pioneering gay-rights organization J-FLAG, Jamaica Forum for Lesbians, All-Sexuals and Gays, has had his own troubling experiences. On Valentine’s Day last year, he was caught in a pharmacy and surrounded by an angry mob, he said. There was no protection from the police or state. ‘When you find police officers who are leading mob attacks, turning up at people’s home like myself, pointing guns at my window, with civilians with them, and saying that I need to leave or they’re going to kill me, it reinforces homophobia.'”

Henry, a leading activist in Jamaica, says it is a place to which he can no longer return.