Yesterday I posted about a 15-year-old gay student, now identified as Lawrence King, who was shot by a classmate in front of at least 20 other students in a classroom at his junior high school in Oxnard, California. King has now been declared brain dead and his body remains on a respirator for organ donation. 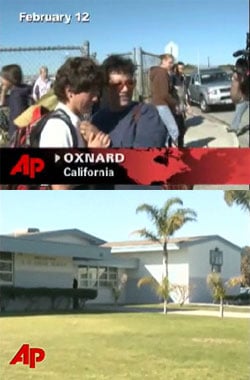 From the details that have emerged so far it appears that the shooting did, in fact, have to do with the fact that King was open about his sexuality.

“Police have not determined a motive in the slaying but said it appeared to stem from a personal dispute between King and the suspect…But several students at the south Oxnard campus said King and his alleged assailant had a falling out stemming from King’s sexual orientation. The teenager sometimes wore feminine clothing and makeup, and proclaimed he was gay, students said. ‘He would come to school in high-heeled boots, makeup, jewelry and painted nails — the whole thing,’ said Michael Sweeney, 13, an eighth-grader. ‘That was freaking the guys out.’ Student Juan Sandoval, 14, said he shared a fourth-period algebra class with the suspect, whom he described as a calm, smart student who played on the basketball team. ‘I didn’t think he was that kind of kid,’ Sandoval said. ‘I guess you never know. He made a big mistake.’…Several students said that a day before the shooting, King and several boys had some kind of altercation during the lunch period. If the suspect targeted King because of his sexual orientation, the case could rise to the level of a hate crime, authorities said. ‘We’ve heard that and a lot of other things,’ [Oxnard police spokesman David ] Keith said. ‘But I can’t say what the motive is until we finish our interviews.’ [Ventura County Dist. Atty. Gregory] Totten said he could not comment on the specifics of the case until he reviewed the police investigation. But a hate-crime enhancement is something that prosecutors would consider as they move forward, he said. ‘It’s something we will look at,’ he said. ‘But the case is going to be reviewed as a murder involving the use of a firearm, and that carries a potential sentence of 50 years to life.'”

The 14-year-old suspect will be charged with first-degree murder.

Apparently King was in counseling for “some of his concerns and issues” according to the school superintendent.

This is why kids need to be taught tolerance in schools. This is why kids need to be allowed to have children’s books that teach them there are gay and lesbian people in the world, and it’s okay. This is why numbskulls like Tennessee Rep. Stacey Campfield, who wants to ban anything in schools that teaches kids about homosexuality from kindergarten to eighth grade, endanger the lives of children rather than ‘protect’ them.