The Montana Human Rights Network and the Western Montana Gay and Lesbian Community Center are calling on Montana Rep. Denny Rehberg (R) to apologize for a childish prank he played on Idaho lawmaker Mike Simpson: 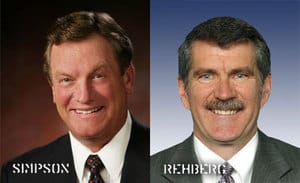 “On a congressional trip to the Middle East last month, Rehberg left an ‘Idaho Travel Package’ on the airplane seat of Rep. Mike Simpson, R-Idaho. The contents included a stuffed sheep with gloves attached to it, a Village People CD, books on cross-dressing and sign language and a T-shirt that reads, ‘My senator may not be gay, but my governor is Butch.’ The shirt referred to Sen. Larry Craig, R-Idaho, who was caught in a men’s airport bathroom sex sting, and Idaho Gov. C.L. ‘Butch’ Otter. Rehberg’s travel bag was first reported by The Hill newspaper, which covers Congress. It said Rehberg was proud of the gift bag and quoted him as boasting, ‘I spent a bit of time putting the things together.’ It said Simpson was amused but not surprised at Rehberg’s action.”

Said Montana state senator and director of the Human Rights Network Christine Kaufmann: “It’s bad enough that Congressman Rehberg consistently votes against equality for gay and lesbian people; we’ve kind of come to expect that. But when he uses his gay and lesbian constituents as the subject of pranks, it’s beyond the pale.”