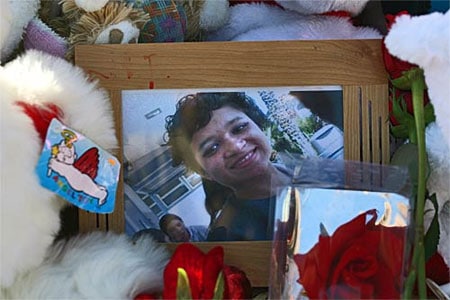 A quickly scheduled peace march in Oxnard, California on Saturday drew nearly 1,000 people distraught over the tragic killing of Lawrence King, the 14-year-old boy who was gunned down by a classmate last week because he was gay. 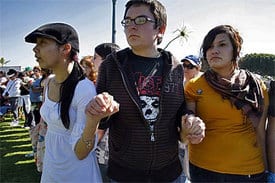 The L.A. Times reports: “‘Larry, Larry, Larry!’ the crowd chanted before marchers clasped hands in a moment of silence for the fallen student. There were no bullhorns, no speeches and no politicians. Just a mass of mostly adolescents wearing bright clothing, carrying signs and singing John Lennon’s ‘Imagine’ and ‘Give Peace a Chance.’ The size of the turnout surprised police, school officials and even the two Hueneme High School sophomores who put the event together just three days ago, spreading the word with fliers, cellphone calls and MySpace bulletins. ‘We were expecting maybe 100 or 200 people,’ said Courtney LaForest, 16, as she gazed at a broad ‘peace circle’ formed by march participants at Plaza Park in downtown Oxnard. ‘This is incredible.’ Courtney said the turnout reflected a community’s anguish over a senseless shooting that has destroyed the lives of two young men. It was also a public plea for tolerance on school campuses for those who are different, she said.”

A memorial service is scheduled for King on Friday at 3 p.m. at Westminster Presbyterian Church at 755 Bard Road in Port Hueneme.

Over 200 messages have already been left on a website set up to remember King.

View an AP news report on King AFTER THE JUMP…