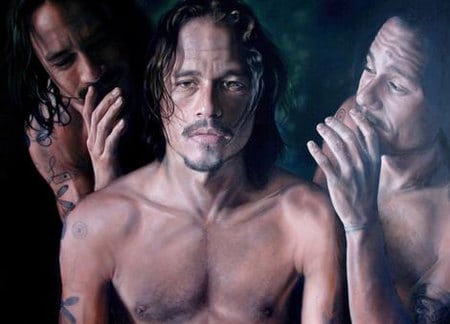 Vincent Fantauzzo’s final portrait of Heath Ledger, which I posted about back in January and reported that Fantauzzo was submitting the painting for the prestigious Archibald Prize, is now officially a finalist for that prize. The Archibald is given to the “Best portrait painting preferentially of some man or woman distinguished in Art, Letters, Science or Politics” according to the organizers.

Forty finalists have been named for the prize out of 693 entries, and the winner is to be named on March 7. It has a history of controversy and this year is no exception. Sam Leach’s self-portrait inspired by Adolf Hitler is leading the charge in that area.

Of working with Ledger, Fantauzzo said: “Heath was a very private person, which is one of the reasons I was so honoured that he allowed me to paint him. He was so easy and professional to work with. He didn’t need any direction, (he was) absolutely focused. Once done, he was back to his usual charismatic self.”