According to a report in the UK tabloid Mirror, Justin Timberlake and Timbaland play bitches to Madonna’s pimp in the video for her upcoming single “4 Minutes to Save the World”. 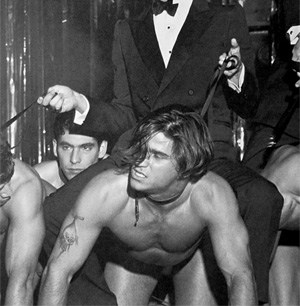 The Mirror reports: “The Queen of Pop’s latest transformation will see her don a dominatrix-style latex catsuit in a raunchier-than-ever video for new single ‘4 Minutes To Save The World’. We can reveal that in the promo Madge plays – wait for it – a pimp who rescues the planet in an impressive 240 seconds. Justin Timberlake and US producer Timbaland play her bitches. The video has been shot over three days in a top-secret location in West London, and included a gruelling all-night shoot yesterday. In the sexually charged video, Madge cracks the whip and gets her slaves, Justin and Timbaland, to do whatever she wants as she towers over their quivering bodies in killer heels. The 49-year-old has brought in her fashion-god pals Dolce & Gabbana to create the no-holds-barred outfits. She’s also roped in the winning team behind her Confessions Live sell-out tour in 2006 – including Grammy award-winning Swedish director Jonas Akerlund. We’re told: ‘One of the highlights in the video is the nightclub scene. Timbaland eyes Madge up in the darkened room, and they disappear off to get close. The camera cuts to Madonna challenging JT to a dance-off and it is just magnificent. They get up close and personal in the battle of the gyrating hips, with sweat dripping all over their bodies.'”

Apparently the Akerlund report is incorrect and the video is directed by French duo Jonas and Francois, so take the rest with a grain of salt. However, as we all know, this is not unfamiliar territory for Madonna.