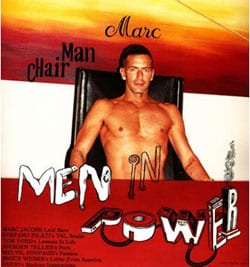 “The new fling is likely the reason things have cooled again between Jacobs and former male escort Jason Preston, whom he’s dated on and off since 2005. Sources said Jacobs’ affair with Rhodes — who describes himself as ‘Addictive. Wild. Open’ on his ManNet.com profile — began last year when the designer invited Rhodes to join him and Preston for a three-way. Jacobs allegedly continued the fling with Rhodes one on one after that. “Jason thought he and Marc were exclusive again,” said our insider. ‘But Marc is sleeping with this porn star behind his back, and sneaking him to Paris for hot sex.'”

Rhodes denies the claims on his blog: “Well page six, thanks for running the story without having any credable information. This is just one of those instances where you can’t believe everything that you read. I do however like that fact that a silly story like this is the top gossip news of the day… i guess it was just a slow week. Where is crazy britney when you need her! I guess it will be an even better story when i show up for his show this Friday. Drama drama drama. Jason Preston and i will just have to get into a cat fight while Marc’s Fall collection comes down the runway.”

Previous Post: « Report: Timberlake and Timbaland are Madonna’s Bitches in New Video
Next Post: In Grand Central Station, a Brief Wrinkle in Time »