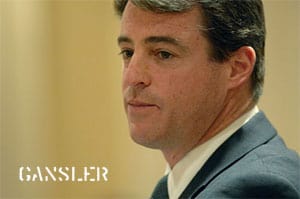 “Gansler, a Democrat, testified in favor of a Senate bill that would remove gender language from the state’s marriage law. Last year, Gansler successfully directed the defense of the law, allowing only male-female unions, during a constitutional challenge in which Maryland’s highest court ultimately left the question of gay marriage to lawmakers. ‘In five, 10, 15 years, there is no question in my mind we will have gay marriage in the state of Maryland and across the United States,’ said Gansler, who acknowledged his arguments would be unpopular with some but that he was obliged as the state’s top lawyer to seek justice. ‘It would be wrong for me to have this job knowing there’s something so wrong in our society and just ignore it,’ Gansler said.”

According to the Baltimore Sun, at yestterday’s Senate Committee meeting “Senators considered several measures related to same-sex unions. One bill would allow gay marriages; another would set up civil unions for same-sex couples, but not marriage. A third would change the state constitution to prohibit same-sex unions.”

Added Gansler, who admits the road to same-sex marriage will be a tough one, “I don’t know that we’ll have the political courage to pass gay marriage. We’ll probably end up getting civil unions, and I understand that, but I think we can at least start the dialogue…Why wouldn’t gay people be allowed to marry? What is the possible justification for that? All of us have gay friends, right? If you say to somebody, I’m not going to stand up for you, what good are you?”