Now that the New York Times has published its McCain-Iseman lobbyist scandal story, what can Democrats expect in return, since we know the right-wing machine isn’t one to take hits lying down? There were rumblings of what might come on The O’Reilly Factor. O’Reilly seems positively unable to contain himself about another percolating scandal…

Says O’Reilly: “Easily done, in the same way the NYT did it. I could do it. I could do it tomorrow. Anonymous sources told me. This individual in America, again a prominent Democrat, was doing this. Everybody in the journalism business knows that story is in play — no one will report it.

Of course, the story that O’Reilly may be referring to is one I posted about some time ago. An update on that, AFTER THE JUMP…

I’ve been hesitant to report on the video again (if you missed it you can watch it here) but there have been developments in the story, and given the recent McCain piece and the Dem nomination approaching its crescendo, I thought I would offer an update. 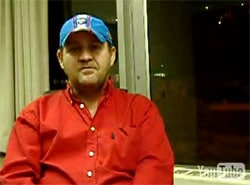 The website WhiteHouse.com (not affiliated with the U.S. Government) offered Sinclair the opportunity to take a polygraph test, and apparently Sinclair accepted.

“After communicating via email to work out the logistics of the challenge, we were able to reach an agreement. Now, the plan is to get together with Sinclair and one of the best polygraph experts in the country, and ask him some questions – with the camera rolling, of course. As more details are made available we will post it here.”

The website claims that the polygraph test has been scheduled for February 26th in New York City: “We’ve picked a polygraph expert, too: a renowned expert who has been involved in quite a few high-profile cases who we’re not going to name until the results are not only in, but have been verified by a second renowned expert. Then, we’ll post the results, the names of both polygraph experts, and other relevant information, along with video and pictures…”