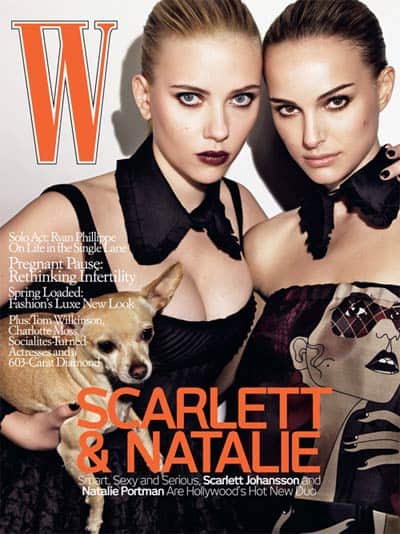 Scarlett Johansson and Natalie Portman play sisters in this month’s The Other Boleyn Girl, in which they catfight over the hunky Eric Bana. They’re also featured in W magazine (looking straight out of the Robert Palmer “Addicted to Love” video) and get around to the topic of marriage:

“Without question, both actresses are passionate about their beliefs. When they really get going on an issue, it can be a little like watching a Hot Topics segment of The View. ‘I’m into monogamy,’ says Portman. ‘But I’m not really into marriage right now. I sort of hate the legal aspect of it. What does the state have to do with it? Why are they making rules that say my lover can stay in the United States if they’re foreign or share my health care benefits because I’m straight’—here her eyes flash with horror—’but if you’re gay, you can’t have that?’…’It’s so archaic,’ Johansson agrees. ‘It’s just, like, bizarre to me. I feel like in 10 or 15 years’ time our children are going to look back and say, ‘What? You were around when gay people weren’t allowed to get married?””