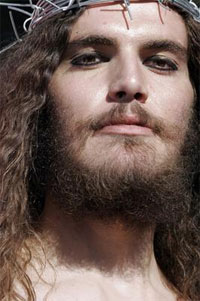 San Franciscans battle it out to be Hunky Jesus in Easter competition: “Catholics have labelled the annual pageant blasphemous, considering that previous entrants have included ‘old school Jesus’, ‘surfer Jesus’ and ‘zombie Jesus’, an irreverent take on the Easter message of Christ rising from the dead.”

Last night’s How I Met Your Mother guest starring Britney Spears was the show’s highest rated episode ever.

18-year-old charged with stabbing death of gay man appears in Brooklyn court: “The defendant, Omar Willock, is charged with a hate crimes offense…At Willock’s arraignment last spring, Hynes told reporters that Willock ‘shouted anti-gay remarks’ at Roberto Duncanson, taunting him even as he tried to get away from Willock. Willock allegedly followed Duncanson, who’d been trying to avoid the confrontation, which had its roots in an verbal exchange earlier that same night, when angry words were exchanged between the two men. Willock had claimed that Duncanson stared at him in an unwanted manner, though the incident did not become violent. When Duncanson returned along the same route later that evening, Willock is alleged to have renewed his taunts. Witnesses told police the two engaged in a brief fistfight, culminating in a chase that ended with Duncanson’s stabbing death.” 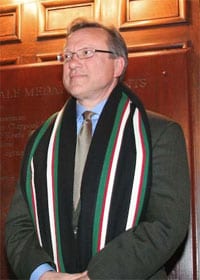 Yale University appoints first openly gay residential-college master, tapping acclaimed singer Richard Lalli MUS ’86 to lead Jonathan Edwards College: “He will be joined by his partner, Michael Rigsby MED ’88, who will add the designation of associate master to his current title: medical director of Yale University Health Services. Lalli, an adjunct professor of music, has taught at Yale since 1982; both are already JE fellows and freshman advisers in the college. ‘This is a great occasion. It’s probably the greatest occasion of my life,’ Lalli said to JE students after University President Richard Levin announced his appointment over dinner Wednesday night in Commons.” College master is one of Yale’s highest recognitions.

Gay Syrian applies for asylum in Scotland: “After Mr Yakob’s terrible ordeal in Syria, it is unacceptable that the Home Office would consider sending him back. There is a very real risk that he would suffer further ill treatment or even possibly death. He has sought asylum in Scotland and I will make an immediate representation to the Home Office in an effort to overturn their ruling before his final hearing in May.”

OP/ED: Repeal of gay rights laws in Oregon would have chilling effect.

Chinese paramilitary police open fire on mass crowd of monks, nuns, and Tibetans: “Residents of Luhuo said that a monk and a farmer appeared to have been killed and about a dozen people wounded in the latest violence in Tibetan areas of China. Xinhua, the official Chinese news agency, said that one officer was killed when police confronted a ‘lawless mob’ in Luhuo. The demonstration began at 4pm when about 200 nuns from Woge nunnery and a similar number of monks from Jueri monastery marched towards the Luhuo Third District government office. They were joined by several hundred farmers and nomads, witnesses said.” 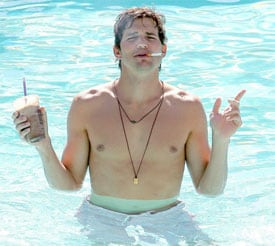 Gay sex expert Michael Alvear spent three months filming couples and analyzing the footage: “I don’t think that people are really that aware of their contributions to the breakdowns in a relationship, and the cameras are able to cut through all the false perceptions that they have about themselves. I’ve always believed this through writing and advising people about sex—the question, ‘What are you unaware of that, if you became aware of it, you could change and make the situation better?’ That’s what the cameras allowed people to do—become aware of the things they’re not aware of. It’s like a mirror that way.”

Gay Wisconsin man settles lawsuit alleging two men attacked him in a deli because he was gay: “Brett Timmerman’s lawsuit claims that he walked into a sandwich shop in Platteville in July 2005 when Oden Waite and Enove Urias made anti-gay remarks to him, put him in a headlock and took him to the ground. Timmerman claims that Waite spit on him twice. Timmerman’s attorney, Jim Madigan, said that he reached the deal with Waite’s attorneys last week. He said that the settlement calls for terms to remain undisclosed.”

Previous Post: « Towleroad Guide to the Tube #264
Next Post: On the Stage: Cat on a Hot Tin Roof, Adding Machine, Parlour Song »