The American Family Association has ended its two-year boycott of Ford Motors, saying, in an ‘Action Alert’ from chairman Donald Wildmon to its minions: “The conditions of the original agreement presented in fall 2005 have been met. We reached the conclusion that Ford had met the conditions of the agreement based on monitoring for several months. Individuals are free to purchase Ford vehicles again.” 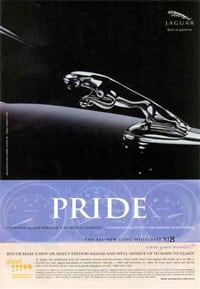 According to the AFA’s ‘Action Alert’, the original agreement contained four items:

“1. Ford would not renew current promotions or create future incentives that give cash donations to homosexual organizations based on the purchase of a vehicle.

“2. Ford would not make corporate donations to homosexual organizations that, as part of their activities, engage in political or social campaigns to promote civil unions or same-sex marriage.

“3. Ford would stop giving cash and vehicle donations or endorsements to homosexual social activities such as Gay Pride parades.

“4. Ford would cease all advertising on homosexual Web sites and through homosexual media outlets (magazines, television, radio) in the U.S. with the exception of $100,000 to be used by Volvo. The Volvo ads would be the same ads used in the general media and not aimed at the homosexual community specifically.”

According to AFA, 780,365 individuals signed the boycott petition.

UPDATE: Ford is refuting the AFA’s claims that anything has changed, according to JoeMyGod, who received this statement from the company: “The AFA has made its decision and is ready to move on. Our principles have not changed. We are committed to treating everyone fairly and with respect, including our dealers, customers and employees. Ford will continue to market its products widely to attract as many customers as possible and make charitable contributions to strengthen communities to the extent business conditions allow. Difficult business conditions in recent years have reduced our overall spending across the board.”

As Joe notes, there has been no surrender by the motor company.

A copy of the alert, AFTER THE JUMP… 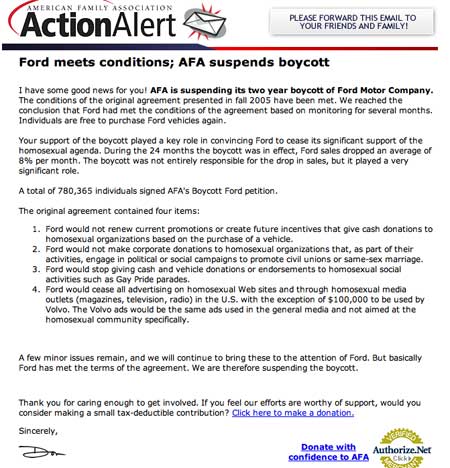