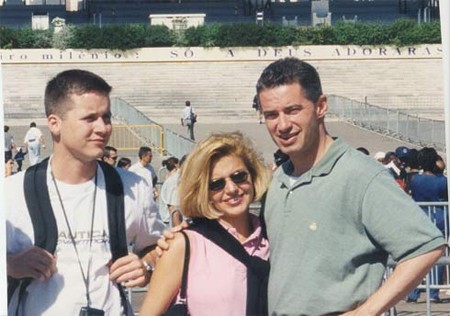 In a statement to ABC News, Dina Matos McGreevey said that Teddy Pedersen’s claims that she and former NJ Governor Jim McGreevey were involved in regular three-way sex trysts that they nicknamed “Friday Night Specials” are false, prompted by jealousy from her husband over the attention she has received since the Spitzer story broke.

“Theodore Pedersen’s claims, as reported in the Newark Star Ledger on March 16, are completely false and were prompted by Jim McGreevey. This all has to do with the publicity I have received since Governor Spitzer resigned. Jim has enlisted one of his cronies in trying to distinguish that situation from his own, and to discredit me in the media. He cannot stand it when I am receiving attention in the media rather than him. This is not the first time. Jim started with a false claim, made shortly before my book was published, that I knew he was gay when we were married. The falsity of that claim is made clear on the very first page of Jim’s book, just as his description of our relationship in his book stands in stark contrast to Pedersen’s false allegations. Jim again became the focus of the media’s attention, just one day after my book was released by announcing his intention to become an Episcopalian priest. Jim has had a close relationship with Pedersen since his days as Mayor of Woodbridge, and arranged jobs for Pedersen from that time through his years as Governor and beyond. They have continued their close relationship since Jim left office. Most recently, in August 2007, Jim and his partner, Mark O’Donnell, funded Pedersen’s vacation to China, along with Jim, O’Donnell, and other members of Jim’s inner circle. This was obviously payback time for Pedersen.”

Jim McGreevey told the AP today that the Friday Night Specials did happen: “McGreevey said the encounters happened, but the couple needs to move forward for the sake of their 6-year-old daughter. ‘This happened, this happened in the past, and now we need to move on with our lives,’ McGreevey said.”

AFTER THE JUMP, Dina Matos McGreevey talks to the AP about the Spitzer scandal.