Alan Duncan, the shadow business secretary, is the first Tory MP to enter into a civil partnership, the Telegraph reports: 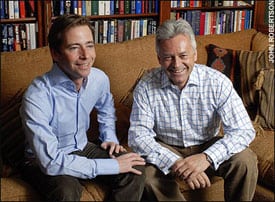 “Mr Duncan (right) and his partner James Dunseath, 39, a press officer in the City, will hold the ceremony at Marylebone registry office in the summer. [Conservative party leader David] Cameron, who has not been to a civil partnership ceremony, is hoping to attend. They have announced their ‘commitment’ to the partnership in the Court & Social page of today’s Daily Telegraph. Mr Duncan popped the question to Mr Dunseath on holiday in Oman on Valentine’s Day. Mr Duncan said: ‘James joked that if I had not asked him on Valentine’s Day he would have asked me on Feb 29.’ Mr Duncan and Mr Dunseath, who works at the Liffe, the financial futures exchange in the City, met at a dinner given by mutual friends 14 months ago. Both of their families, who are steeped in the military tradition, have given their blessing to the civil partnership.”

Duncan was also the first Tory MP to come out of the closet. Said Duncan: “I never ever imagined that one day I would be a beneficiary of the legislation. What James and I are entering into is not a marriage, it is a civil partnership. You could not find two more conventional people to enter into a civil partnership.”

Previous Post: « JC Chasez and Chace Crawford: Attached at the Hip
Next Post: Big Brother 9‘s Housemates on Entering from the Rear »