The Family Research Council’s Peter Sprigg spoke to the Medill Reports about the Uniting America Families Act, which would eliminate discrimination with regard to foreign partners of gay and lesbian citizens, allowing them to obtain permanent resident status in the same way that spouses do. 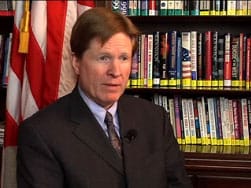 Not surprisingly, Sprigg had some unenlightened things to say about how he feels gays and lesbians should be treated with regard to immigration.

And no doubt he would if he could.