Dayton Soren, an aide to John McCain, was suspended after posting what he said was a “good video” on Obama and Reverend Jeremiah Wright to his Twitter site, Talking Points Memo reports: 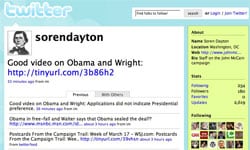 “The move by McCain’s aide could create controversy for the McCain camp, because the video itself is thoroughly reprehensible — it interweaves footage of Obama explaining why he won’t wear the American flag pin, Wright saying ‘God damn America,’ Malcolm X, and Obama’s wife saying that his candidacy has made her proud of America for the ‘first time.’ That McCain’s campaign aide spread this runs directly counter to what McCain himself has said about the Wright controversy. He suggested in a recent interview that Obama shouldn’t be held liable for his pastor’s views, and a top aide to McCain, Charlie Black, also recently suggested that McCain didn’t believe in trafficking in such stuff.”

In related news, the Washington Blade today posted an interesting article regarding Reverend Jeremiah Wright’s views on gay people, and the video of Obama’s “A More Perfect Union” speech on race has been viewed more than 2 million times on YouTube.