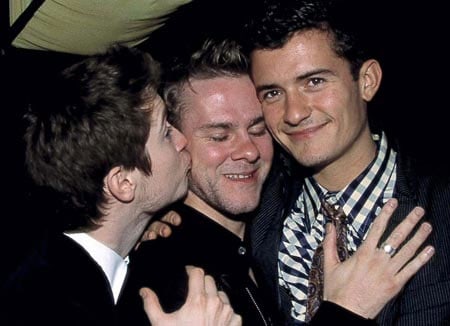 In a new ‘E Post’ on his website, Ian McKellen answers a question from a Lord of the Rings fan regarding rumored gay goings-on between the young actors on the sets of those films. The fan asks, “Basically, I’m just curious to hear if you find it upsetting or bothersome that so many actors (that you know) now are ‘in the closet’ just to boost their careers because they feel their female fans would not like them anymore if they ever came out (which I personally disagree with).”

Says McKellen: “This gossip is all news to me. Elijah, Dominic and Orlando introduced me to their girlfriends during shooting. I didn’t ever meet Viggo’s partner although his son visited a a few times. It would seem that none of my friends can be accused of hypocrisy. Probably the fevered imagination of slashers is to blame. Hiding homosexuality is a long-tested shame in Hollywood and no doubt continues even in these days of gay marriage and gay civil partnerships. I agree that audiences are much less perturbed than producers allow, by a performer’s sexuality. How else to explain the continuing popularity of George Michael, Elton John, Rupert Everett, Ellen de Generes and, excuse me, also the gay actor who played Gandalf?”

The Lord of the Rings [ian mckellen]
(image source)