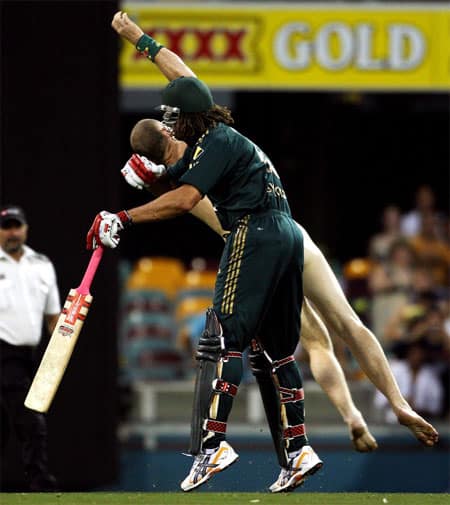 Australian cricket player Andrew Symonds had the opportunity to “blow off some steam,” according to The Age, when a streaker appeared on the field during a match Tuesday night:

“During the 10th over, play was held up as the male streaker showed security a clean pair of heels – and a whole lot more. But as the smug pitch invader rounded Symonds to complete his naked lap, the burly Queenslander put on a hit that left the intruder air-borne – and the crowd gasping. Security quickly pounced as a nonchalant Symonds hardly moved at the non-striker’s end, as if it was all in a day’s work.”

Symonds may pay a stiff penalty for the bruising: “Symonds could face a serious punishment if the International Cricket Council decides that he breached section 4.2 of the player’s code of conduct relating to a physical assault of a rival player, an official or a spectator. It carries a ban ranging anywhere from five Test matches or 10 limited-overs internationals up to a life ban. The spectator is expected to be fined $3,000 for invading the pitch – but faces a possible jail term for wilful exposure.”

Clip AFTER THE JUMP (NSFW)… 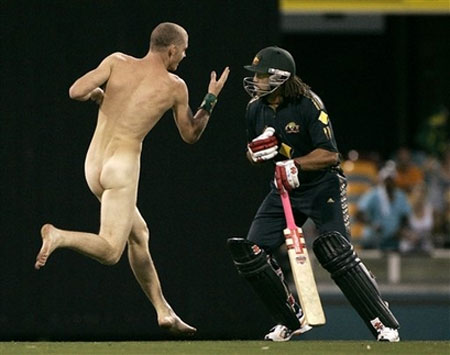 Streaker no match for Symonds [the age]