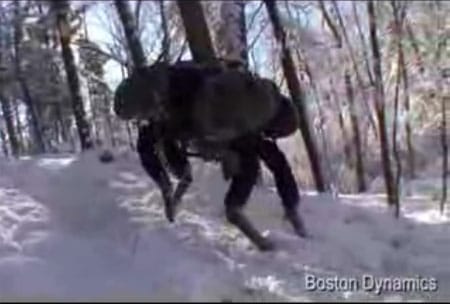 Robotics company Boston Dynamics yesterday released a video of its “Big Dog” quadruped robot, which I must say is quite impressive in a frightening, Terminator sort of way. Kind of like if a pit bull were combined with a giant tarantula.

The Journal of New England Technology writes: “Boston Dynamics engineers were contracted to develop a robot with the ability to run, maneuver and jump to avoid obstacles. The robot would measure 1 meter tall and 2 meters wide, according to the U.S. Department of Defense. The goal of the project, which was slotted to last 15 months, is to produce a robot with animal-like strength, speed and mobility, according to defense officials.”

And the ability to scare the bejesus out of you.

Previous Post: « The Dream Ticket and The Scream Ticket
Next Post: UK Report: ‘Gay’ Now the #1 Abusive Word in Schools »