Barack Obama sat down with The Advocate for an interview addressing what he’d hope he could achieve in his term as president, black civil rights vs gay civil rights, his first experience with a gay person, and the lingering distrust over the Donnie McClurkin fiasco. Here are a few excerpts. 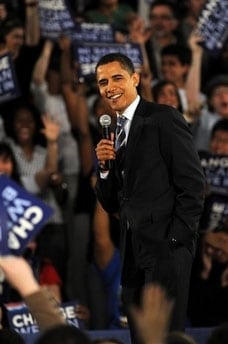 On what some have perceived as a “silence” toward gay press: “I haven’t been silent on gay issues. What’s happened is, I speak oftentimes to gay issues to a public general audience. When I spoke at Ebenezer Church for King Day, I talked about the need to get over the homophobia in the African-American community, when I deliver my stump speeches routinely I talk about the way that antigay sentiment is used to divide the country and distract us from issues that we need to be working on, and I include gay constituencies as people that should be treated with full honor and respect as part of the American family. So I actually have been much more vocal on gay issues to general audiences than any other presidential candidate probably in history.”

On federal benefits: “…an area that I’m very interested in is making sure that federal benefits are available to same-sex couples who have a civil union. I think as more states sign civil union bills into law the federal government should be helping to usher in a time when there’s full equality in terms of what that means for federal benefits.”

On asking same-sex couples to “wait their turn” for marriage equality: “Anybody who’s been at an LGBT event with me can testify that my message is very explicit — I don’t think that the gay and lesbian community, the LGBT community, should take its cues from me or some political leader in terms of what they think is right for them. It’s not my place to tell the LGBT community, wait your turn. I’m very mindful of Dr. King’s ‘Letter from Birmingham Jail’ where he says to the white clergy, don’t tell me to wait for my freedom. So I strongly respect the right of same-sex couples to insist that even if we got complete equality in benefits, it still wouldn’t be equal because there’s a stigma associated with not having the same word, marriage, assigned to it. I understand that, but my perspective is also shaped by the broader political and historical context in which I’m operating.”

Obama Talks All Things LGBT with The Advocate [the advocate]