Clay Aiken appeared recently on The Billy Bush Show and told Bush that the only people that care about the love lives of celebrities are the press. 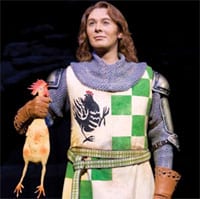 Said Aiken: “People don’t want to have that type of stuff pushed, people who are living in Omaha or in Charlotte or wherever. They don’t want stuff like that pushed in their face. I don’t think that’s necessary and that’s also not what I’m here for. I mean, I went on Idol to be a singer, I went on Idol to be an entertainer and that’s what my priority is…I think when you get into anything and you’re not used to people scrutinizing this, that or the other… it bothers you. After awhile you kind of just say, ‘Forget this … This is not who I am, this is not about me, what I want to do is be a singer, want to be an entertainer, and forget all that stuff.'”