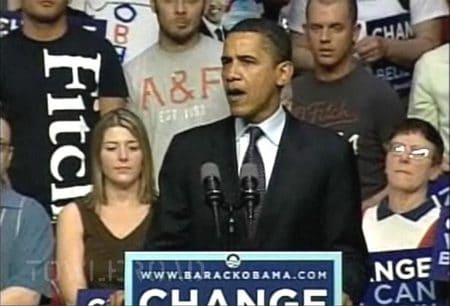 Questions regarding the origin of the Obama Abercrombie boys have been answered:

“The so-called Abercrombie boys who showed up behind Senator Barack Obama during his speech Tuesday night in Evansville, Ind., were just random Obama fans…Because they were all wearing T-shirts from Abercrombie & Fitch, they stood out in the crowd, even receiving cell-phone calls from friends who had spotted them on television during the speech. Soon the media mentioned them, wondering whether they were part of an advertising campaign, a shrewd bit of product placement by the retailer, which is geared toward the same young crowd attracted to Mr. Obama’s candidacy. Not so. The young men saw a report on CNN and called the network to say they had not planned anything. One of them works at the Abercrombie & Fitch store in Evansville. He and one of his brothers and a friend decided to go to the rally; they wear A&F clothes all the time and didn’t think twice about the T-shirts. At the rally, a campaign volunteer asked them to stand behind Mr. Obama during his speech. It was not clear what role the T-shirts played, if any, in their selection. Spokesmen for the Obama campaign and A&F said there was no plan to highlight A&F, and both were caught by surprise when the T-shirts drew such attention. Virtually all campaigns strategically select the audiences who appear behind their candidate so as to send a message to television viewers.”

As I noted yesterday, folks are already selling Obamacrombie T-shirts.

Said Tom Lennox, VP-corporate communications for A&F: “We appreciate the exposure, but can not take credit for it. So, thanks to the Obama campaign for this great product placement. We wish we had thought of it. If Hillary is interested, we have stores all over North Carolina, Indiana and Oregon.”