The Danish organization Rainbow has reserved spots for 36 urns in the Assistens Cemetery in Copenhagen specifically for gays who want their resting place to be with other gay people: 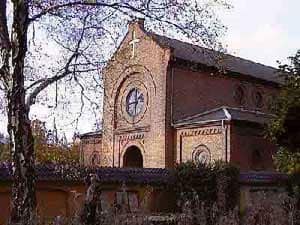 “Ivan Larsen said he and his partner, Ove Carlsen, felt they wanted to be close also after death, and co-founded Rainbow a year ago that offers its members a funeral urn site for 2,500 Danish kroner ($A567.69). ‘We have our own places where we can meet and have fun, gay bars and such. That is why we wanted our own graveyard,’ Larsen, a priest, told public broadcaster DR. Carlsen said some eight urn sites were already reserved. The graveyard is marked with a big stone and the rainbow flag that often symbolises gay and lesbian community pride. Denmark pioneered same-sex unions in 1989.”