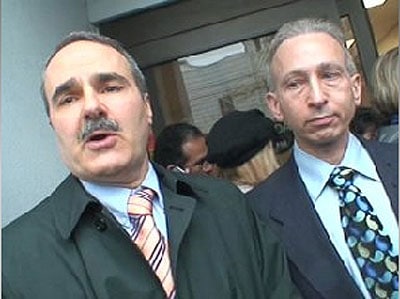 Oyster Bay on New York’s Long Island was the site of a same-sex marriage demonstration as gay couple Dan Pinello, 58, and Lee Nissensohn, 50 walked in to the Oyster Bay clerk’s office yesterday afternoon and held a symbolic sit-in, demanding that they be issued a New York marriage license. Pinello and Nissensohn have been together 13 years.

Pinello and Nissensohn knew they would not be issued one, but sat in the office until they were issued tickets for trespassing. Outside, a crowd of nearly 60 supporters (mostly strangers) held signs and chanted. The supporters were among those who had been sent letters by the couple announcing their intention to make this act of civil disobedience.

Said Pinello, a government professor at John Jay College of Criminal Justice: “We are law-abiding citizens. We pay our taxes. We have no other choice left.”

Newsday reports: “The goal of the couple’s ‘act of civil disobedience’ – as they called it – was to persuade Sen. Carl Marcellino (R-Syosset) to pressure State Senate Majority Leader Joseph Bruno (R-Brunswick) to take a bill that would allow same-sex marriage to the Senate floor for a vote. A Marcellino spokeswoman has said the senator supports state law, which says marriage is between a man and a woman. Bruno has said he is against the bill. The bill, which was co-sponsored by the couple’s own senator, Craig Johnson (D-Port Washington), remains in the judiciary committee.”

Watch NBC4’s news report on the sit-in, AFTER THE JUMP…