A gay student at one of Brisbane, Australia’s elite Anglican private schools has made national headlines after threatening a boycott over the school’s policies for its spring formal, at which male students are required to bring a female date. 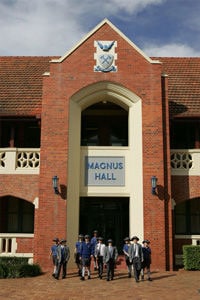 News.com.au reports: “The student, who did not wish to be named, said he felt misled following his approach to a senior teacher and said he expected students would consider a boycott. The student said he approached Head of Senior School Dr Phil Cummins, who told him the school’s practice of allowing only female formal partners would be “quietly changed” if he did not make a big deal about it. ‘He said to me, ‘If you go quietly about this and if you don’t cause us too much trouble, we will just quietly change the rules so they’re allowed and no-one gets hurt’,’ the student said. ‘At the start of 2006, there was no one at the school who was openly gay, now there are dozens. Generally it’s a very accepting school. It’s not like anyone has ever been persecuted for being gay. A few students will have second thoughts about going to the formal because of all this.'”

The headmaster, Jonathan Hensman, stands by the school’s policy: “We decide what is appropriate behaviour and what is not.”

Australia’s leading Anglican Archbishop Phillip Aspinall, who heads the school council, told ABC News: “I have no personal objection to a school deciding to allow boys to take friends who are boys or girls to take friends who are girls to school formals. But I understand in this particular instance the school has decided that its approach is to emphasise the interaction of young men and young women and providing them with an opportunity to do that in this kind of formal setting. And I have no objection to that either. I think that’s a reasonable and legitimate approach.”

Previous Post: « Rosie O’Donnell on Being a Gay Mom at Autism Benefit
Next Post: 41 hours in Elevator Hell »