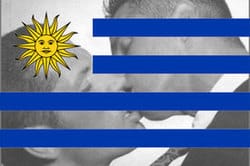 Agence France Presse reports: “Moretti later told AFP that after living together for 14 years, he and Figuera thought their marriage was ‘a matter of justice and a step forward for Uruguayan society.’ The so-called ‘cohabitation union law’ went into effect on January 1, allowing heterosexual and homosexual couples living together for at least five years to receive the same legal rights and benefits that traditional marriage bestows.”

Previous Post: « Lance Bass on ‘Day of Silence’: I’m Going to Use My Voice
Next Post: James Franco the Face of Gucci by Gucci »