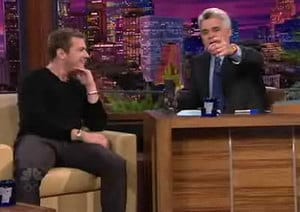 Said Leno: “You know, it’s really odd how on our show we have plenty of gay guests and plenty of gay guests who you know – ‘how’s your relationship going, how’s your family going’ — Melissa Etheridge, with everybody else. To me I never made fun of gay rights or even gay marriage. Do what you want to do. But to me — fashion, lifestyle, hair, you know that kind of stuff — you’re a comic. Thats what you do. And what it was was Ryan Phillippe, who grew up in a strict Baptist background, he came to New York as an actor and his first job was playing a single gay teenager or young man. So I said ‘what was that like, coming from a Baptist background?’ And he said ‘well a little tricky with my parents, they didn’t quite get it.’ And then I said ‘ok, so you were a single good-looking guy on a soap opera’ and I made the mistake, I guess, of saying alright, ‘Give me your gayest look now. Give me that soap opera gayest look. Well, apparently ‘gayest look’ offended somebody and, you know. But what happens in these things is it then builds to — I would read the blog, ‘I didn’t see Jay Leno’s anti-gay tirade but I heard he went on and on!’ So it’s one of these things where it just builds and builds and you go look, I’m a comic. If I offended anybody, I’m sorry, this is my job to make a laugh and we’re a live show and maybe you say something that’s inappropriate and I apologized, and it’s as simple as that….(jokes) well I am in rehab now!”