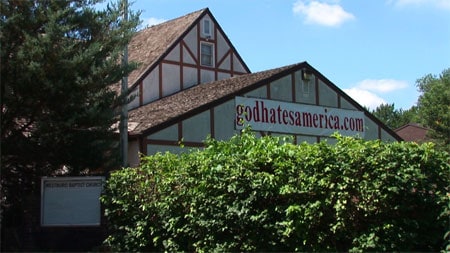 A judge in Baltimore placed a lien on the properties owned by Fred Phelps’ Westboro Baptist Church in Topeka, KAnsas and ordered his daughters to post bonds of $100,000 and $125,000 within 30 days while the church appeals a ruling in which it was ordered to pay a $5 million judgment (halved from a prior judgment of $10.9 million) to the father of a soldier slain in Iraq. Albert Snyder took the church to court after it picketed the funeral of his son. The church has been picketing the funerals of many soldiers, saying that their deaths are the result of God’s anger at America’s tolerance for homosexuals.

According to the Baltimore Sun, “On Thursday, U.S. District Judge Richard D. Bennett placed a lien on the properties of the church and its founder, Fred W. Phelps Sr., and ordered two of Phelps’ daughters to post cash bonds of $125,000 and $100,000 within 30 days. The church property was appraised recently at $442,800. Bennett also placed a lien on a $232,900 office building owned by Phelps and his wife that the family law firm uses. The liens mean that no new mortgages can be taken out on the properties, and no money can be borrowed against the equity in them. Bennett noted that it would require ‘extraordinary circumstances’ for the church to avoid posting a portion of the judgment.”

On March 30, approximately 300 people gathered near the church’s property in Topeka in a ‘Million Fag March’ to picket Phelps and his church’s intolerance.

Previous Post: « Britney to Depend on the Kindness of Strangers on London Stage?
Next Post: Jay Leno on ‘Gayest Look’ Controversy: That’s What Comics Do »