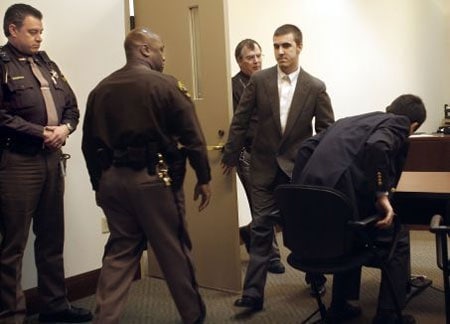 Steven Scarborough, a 22-year-old Tennessee man, who faced a felony murder charge that carries a life without parole sentence in the killing of 62-year-old Victor Manious in Grand Rapids, Michigan, got off easily yesterday when a jury found him guilty of voluntary manslaughter which carries a maximum 15 years in prison.

Scarborough’s attorneys used a “gay panic” defense, suggesting that the murder was a reaction to Manious’ sexual advances. Prosecutors had said that Scarborough lured Manious from a gay bar to his friend’s apartment with intent to rob him, but ended up murdering him. Manious’ body was found in the trunk of his car, and Scarborough spent the days following the murder shopping, traveling, and dining with Manious’ credit cards.

The Grand Rapids Press reports: “Upon hearing the verdict, Scarborough hugged his lawyer, Paul Denenfeld, and smiled. His mother, Veronica Hand, in court with her husband, Michael, wept. Grand Rapids Police Detective Kristen Rogers, who interviewed Scarborough once he was apprehended, put her head in her hands. Kent County Assistant Prosecutor Helen Brinkman said she would tell the Manious family she did her best. ‘I just wish the jury would have known about his previous record and that he came to Michigan to flee the conviction,’ she said. Denenfeld said the jury was aware of his previous record and obviously believed that he was a victim of an assault.”