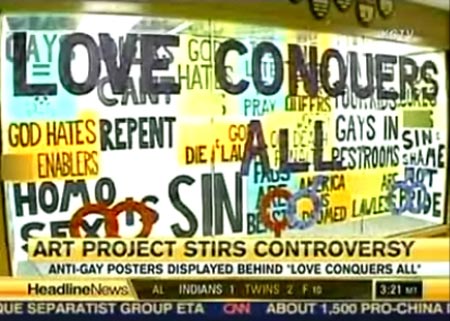 Amy Burrow, a senior at Independence, Missouri’s Truman High School, is causing controversy with a project she did for her ‘3-D Art Class’ which involves a glass school showcase featuring the words “Love Conquers All” over a collage of anti-gay propaganda designed to look similar to that used by Fred Phelps’ Westboro Baptist Church. 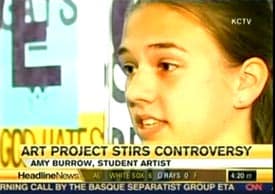 KCTV reports: “She spent two weeks working on the project for her 3D art class. She was at the school until 10 p.m. Thursday, keeping the project a secret from students until Friday morning…Burrow had created other controversial work at school about abortion, smoking, and all of it, including Friday’s project, was approved by the art teacher and the school principal, she said. ‘I was just in shock of something being able to happen like this, that our principal would allow this to happen,’ said Chris Wilson, a student.”

Said Burrow: “I’m happy actually, because at least it involved thought. At least it got them to stop and look at it. People stop me in the hallways and tell me, ‘Amazing job. Good job. I love it,’ and then other people have said, ‘I can’t believe that’s allowed. That’s ridiculous.”