In response to word that gay groups planned demonstrations in Moscow on the occasion of the May Day (May 1) holiday, Moscow Mayor Yuri Luzhkov’s representative Sergei Tsoi warned that any actions would be halted by the government. 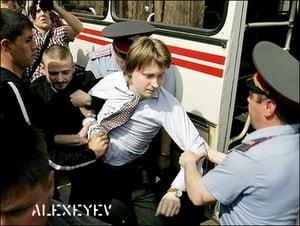 Said Tsoi: “The council will act decisively and uncompromisingly to prevent attempts to hold such events because society is overwhelmingly opposed to the gay lifestyle and philosophy. It is a matter of surprise and indignation that gays plan to carry out unsanctioned gatherings in various parts of Moscow during the Festival of Peace and Work. There could be bloodshed and no one wants that.”

Activist Nikolai Alexeyev said that gay groups plan to apply to hold five events every day throughout May, despite Luzhkov’s warning and prior actions against demonstrators.

Said Alexeyev: “This is not a question of security. It is only a question of the personal hatred of the Moscow mayor towards gay people.”

He also said the events would not be characerized by flamboyance or nudity: “If everyone sees that these people are not nude or wearing make-up… there will be many questions about why this event was banned.”

Last year’s gay rights rally in May turned violent and activists reported that Moscow police arrested not the ultra-nationalists and members of the ultra-Orthodox Russian church who began the violence but the gay rights demonstrators at which it was directed. They included Peter Tatchell,d Right Said Fred singer Richard Fairbrass, Italian MEP Marco Cappato, German MP Volker Beck, the leader of GayRussia, Nikolai Alexeyev, and dozens of other activists.