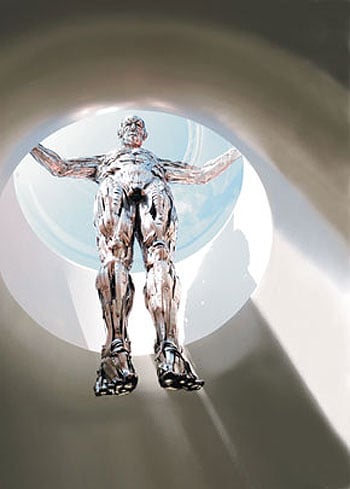 Alexander McQueen’s new L.A. Boutique opens today and the designer plans for it to be an outpost of art as much as fashion:

WWD reports: “The British designer heralded his arrival on Los Angeles’ luxury retail landscape with his signature flair — installing a 9-foot-tall sculpture of a naked man that pokes through the roof of his flagship on Melrose and Orlando Avenues, which opens today. ‘Angel of the Americas,’ the stainless steel sculpture by artist Robert Bryce Muir, is suspended vertically from a circular skylight. Its head, outstretched arms and torso are visible above the structure’s rooftop, the lower body of the anatomically correct work is suspended above the selling floor. ‘L.A., like London, has so many art collectors and I wanted to give a focal point to the store,’ McQueen told WWD. ‘I was also inspired by the Jesus Christ statue in Rio de Janeiro. Los Angeles is the City of Angels and I wanted something to reflect that.’ A billboard above the store (now featuring a cell phone ad) is to serve as an unlikely canvas, showing work by collaborating artists.” 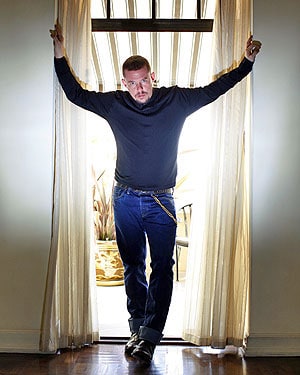 The L.A. Times also ran a long profile of the designer on Sunday:

“Physically, McQueen has always come across as a sparkplug of a fellow, a muscled knot of a hooligan with a wrestler’s physique and close-cropped hair. But sitting on an overstuffed couch in the Chateau’s lounge the day before his 39th birthday (he was born on St. Patrick’s Day, 1969), he seems as dangerous as an actuary with a head cold. Clad in white running shoes, dark blue jeans and a blue crew-neck sweater over a white button-front shirt, he’s sniffling slightly (blame the air conditioning) and sipping tea from a cup the size of a soup tureen. He admits that his latest runway show was ‘a bit more calculated and thought out’ than previous ones, partly the effect of losing his longtime friend and mentor, Isabella Blow. After she died, McQueen went on a pilgrimage to India (he’s a Buddhist). There, in addition to finding inspiration for both his men’s and women’s collections (the men’s was full of references to the Tibetan Plateau, including shaggy fur hats (remember that?) and mirror-embroidered pieces), he seemed, despite the cliché of it all, to find his center. ‘The reason I got into this business is because I love what I do,’ he explained. ‘After I was at Givenchy, I lost that feeling. But after my friend died, I found a new love for it because she loved it and she found me because of what I was good at. I had to slap myself about the face and say, ‘Pull yourself together. This is what you love doing, so do it properly.’ It was a wake-up call, and I actually do love it more than I ever have.'”

Previously
Are You a Well-Turned-Out Male? [tr]

Previous Post: « Tom Cruise Did Not Attend Gay Artist Party with Gay Cowboy
Next Post: John Barrowman on Botox: How to Avoid the Nicole Kidman Look »