Despite vocal objections from Roberta Sklar of the National Gay and Lesbian Task Force and Mara Keisling, executive director of the National Center for Transgender Equality, Senator Ted Kennedy has begun a push in the Senate to bring the trans-exclusive ENDA bill, which was approved by the House in early November, to the floor for a vote: 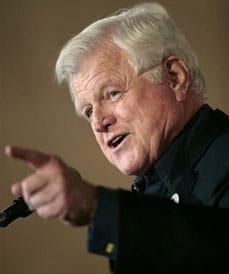 “Kennedy said Senate approval of the bill could pave the way for extending protections to transgender workers next year, when he hopes Democrats will increase their numbers in Congress and a Democratic president supporting gay rights will be in the White House. ‘The fact is that the House of Representatives has taken action,’ Kennedy said in an interview Tuesday with The Associated Press. ‘The best opportunity for progress is … to follow along on the action of the House of Representatives, and then look down the road to a new day after we have a good Democratic Congress and a Democratic president.’ Kennedy expects an ‘uphill fight’ in the narrowly divided Senate, where 60 votes rather than a simple majority would be needed to overcome expected GOP stalling tactics. Kennedy and Senate Majority Leader Harry Reid, D-Nev., who supports the bill, are working on the timing for bringing the bill to the floor.”

Said Keisling: “We’ve expressed to Senator Kennedy’s office our disappointment and opposition to his idea to move forward. We’re always working and talking with his office and we’ll see what happens.”

A Bush veto is expected if the bill does pass the Senate.