Openly gay Australian High Court judge Michael Kirby revealed at a forum on religious tolerance and homosexuality on Tuesday that he had been attacked by a senior Anglican minister over his sexuality: 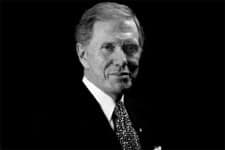 “The rector of St Stephen’s Church in Bellevue Hill, the Reverend Richard Lane, denounced the judge for calling himself a Christian Anglican while living in an openly gay relationship and warned as a ‘messenger, watchman and steward of the Lord in the Anglican Church of Australia’, he faced God’s judgment. To call himself a Christian Anglican was a ‘perversion of truth’ and to continue to do so without changing his lifestyle would brand him, like Herod, a ‘coward, a liar, a deceiver’ and a ‘lawless one’. ‘I appeal to you to cast yourself on the mercy of Jesus … That is admit your sin, confess your wrongdoing and turn in humble repentance to the Lord Jesus, who alone can forgive you,’ Mr Lane said.”

Kirby replied that Lane had ignored the “central loving message of Jesus of the gospels”. Said the judge: “To defy modern knowledge and to stick to uninformed interpretations is truly irrational. To do so selectively is specially so. It is a reason why the churches are losing rational adherents.”