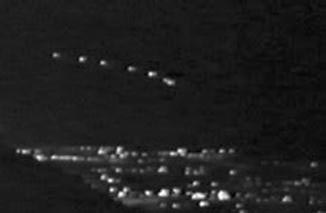 “Dozens of listeners called News/Talk 92-3 KTAR just after 8 p.m. reporting they were watching the four mystery lights. ‘From my position, it looked like they were just hanging, not moving at all,’ said one man, who called 92-3’s ‘Gaydos After Dark.’ He said he ‘absolutely’ saw something. A woman caller said, ‘It looked like four red tower lights, but it was pretty high up in the air. I called my husband and he said, ‘Get home, what’s wrong with you?” A man in north Phoenix told CBS-5: ‘They were about 3,000 feet high, approximately. They looked as though they were kind of hovering or floating from west to east, very slowly. They were up there for 15 or 20 minutes.’ Those who saw them said the lights were visible about 13 minutes before moving off to the east. Deer Valley Airport, which was the closest air field to the lights, had no explanation for them. Neither did Phoenix Sky Harbor International Airport or Luke Air Force Base, which said it had no jets flying at the time.”

Plenty of video surfaced but the source remained unknown.

AFTER THE JUMP, former Arizona Governor Fife Symington talks about seeing similar lights back in ’97.