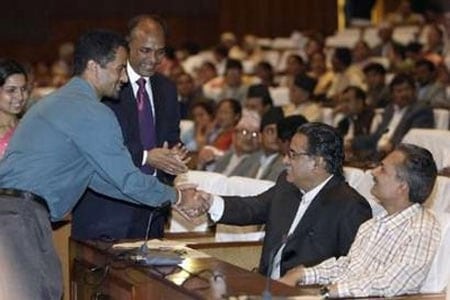 At the beginning of May, I mentioned that the founder of Nepal’s gay activist group the Blue Diamond Society, Sunil Pant, became the first openly gay politician to be elected to parliament in that country.

Here’s a photo of Pant before the oath ceremony, which took place yesterday. The nation is set to become a republic today, the BBC reports:

“As the assembly was being inaugurated a bomb explosion in the capital injured two people. The assembly is huge and the ceremony saw 575 men and women being sworn-in, many in traditional clothing. The ceremony was performed by an older member of the newly-elected body…Nepal stands on the brink of huge change…The assembly has been given the initial task of rubber-stamping the abolition of the monarchy, a move which is due on Wednesday. Reports said King Gyanendra and Queen Komal were seen driving out of the royal palace during the afternoon, but it was not clear where they were going or for how long they would be gone. Senior politicians have urged the monarch to leave the palace peacefully, but some have said force might be used if that does not happen. Exactly how a republic will be voted in on Wednesday is still not clear.”

Previous Post: « Penn Badgley Tells You Everything He Knows About Sexy
Next Post: Berlin’s Monument to Gay Holocaust Victims: The Kiss Revealed »