First Lady Laura Bush held a rare press conference today about the cyclone that struck Myanmar (Burma) that may have killed up to 50,000. 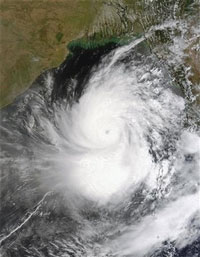 “US First Lady Laura Bush accused Myanmar’s military rulers Monday of failing to warn their citizens in time about a killer cyclone and pressed the junta to accept US aid in the disaster’s wake. ‘Although they were aware of the threat, Burma’s state-run media failed to issue a timely warning to citizens in the storm’s path,’ Bush said in an unusual appearance at the White House briefing room podium. ‘It’s troubling that many of the Burmese people learned of this impending disaster only when foreign outlets, such as Radio Free Asia and Voice of America, sounded the alarm,’ she said. Washington calls the country Burma.”

Not that Burma’s military government doesn’t deserve to be criticized for the treatment of its people. But then, of course, there’s this:

Washington Post, 1/06: “In the 48 hours before Hurricane Katrina hit, the White House received detailed warnings about the storm’s likely impact, including eerily prescient predictions of breached levees, massive flooding, and major losses of life and property, documents show. A 41-page assessment by the Department of Homeland Security’s National Infrastructure Simulation and Analysis Center (NISAC), was delivered by e-mail to the White House’s ‘situation room,’ the nerve center where crises are handled, at 1:47 a.m. on Aug. 29, the day the storm hit, according to an e-mail cover sheet accompanying the document…The documents shed new light on the extent on the administration’s foreknowledge about Katrina’s potential for unleashing epic destruction on New Orleans and other Gulf Coast cities and towns. President Bush, in a televised interview three days after Katrina hit, suggested that the scale of the flooding in New Orleans was unexpected. ‘I don’t think anybody anticipated the breach of the levees. They did anticipate a serious storm,’ Bush said in a Sept. 1 interview on ABC’s ‘Good Morning America.'”

Laura Bush urged Myanmar to take the foreign aid to help its people. Of course, if Myanmar uses the U.S. as its example, they’ll likely refuse it.