Yesterday, a Pennsylvania Senate committee voted 18-8 to send Senate Bill 1250, which would place a measure on the ballot banning same-sex marriage, to the full Senate for a vote. The measure must be approved in two consecutive legislative sessions for it to be placed on the ballot. 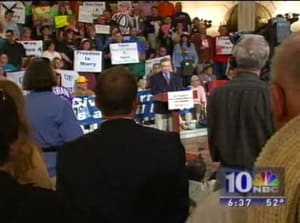 Following the vote, lawmakers attended a boisterous rally against the ban in the Capitol:

“Senate Bill 1250, which is meant to bolster the state’s 1996 Defense of Marriage Act, which already prohibits same-sex marriage, “is disheartening and discriminatory,” said Sen. Jim Ferlo, D-Highland Park. ‘It’s marriage mischief — an attempt to enshrine bigotry in the state constitution,’ he told an angry crowd of 200 protesters gathered in the Capitol rotunda. ‘Politicians always want to get into your wallet, but now many politicians, some Democrats as well as Republicans, want to get into your bedroom.’ Other opponents of the constitutional amendment included Rep. Dan Frankel, D-Squirrel Hill, and Democratic Sens. Vincent Fumo of Philadelphia and Connie Williams of Delaware County. ‘When the basic rights of any group are threatened, then no one’s rights are safe,’ said Mr. Fumo, amid echoing chants of ‘Stop this bill! Stop this bill!’…’Freedom is at risk in the bill,’ said Mr. Fumo, whose South Philadelphia district includes considerable numbers of gay and lesbian voters. ‘It’s possible this legislative body could embed discrimination in our constitution by taking away the rights of a group of people based on their sexuality.'”

UPDATE: The Senate has tabled the bill, as it sees no chance of it passing in the House.

AFTER THE JUMP, a news report from NBC10 on the vote and rally…