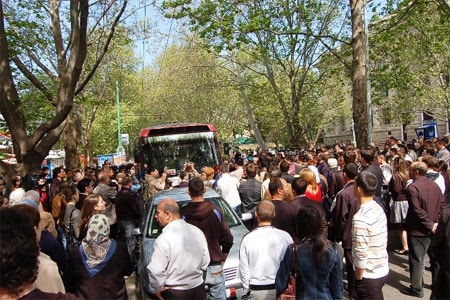 Sixty gays and lesbians aboard a bus headed to march at a Gay Pride rally (which late on Friday the mayor of Moldova’s capital Chisinau announced the city would not allow) were surround by hundreds of nationalists and neo-Nazis who threatened to kill them while the police stood by and watched it happen, according to UK Gay News:

“The law on freedom of assembly of Moldova guarantees peaceful assembly to everyone, and puts an obligation on the police to guarantee the exercise of the right and the safety of participants. ‘The police did not facilitate the exit of pride participants from the bus into the street, did not prevent the rival aggressive groups from intervention, and through their passivity encouraged escalation of violence and the build up of the all-permissive hostile atmosphere,’ GenderDoc-M said in a statement this afternoon. Independent human rights observers witnessed hatred shouts, such as ‘Beat them to death’ and ‘Don’t let them escape’. 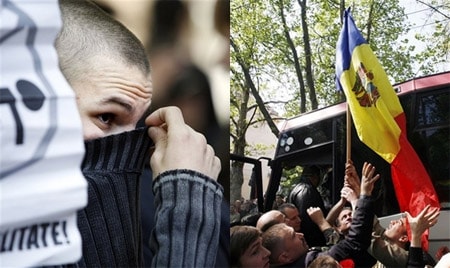 Six police cars were allegedly parked 100 meters away but there was no interference of the riot by law enforcement.

UK Gay News adds: ” Two unidentified well-built men wearing the signs of the rival groups, forced the doors from both sides of the bus and demanded the destruction of all march materials (banners asking for anti-discrimination law and tolerance, European Union and Moldovan flags and rainbow balloons) as condition for lifting the blockade of the bus. According to the estimates of independent observers some 200 to 400 people had surrounded the bus. The core of the crowd were teenagers, some dressed military-style, some wearing black masks and others skinhead-like carrying A4 posters with derogatory homophobic messages and signs. The outer ring of the crowd was mostly middle-aged men wearing black clothes encouraging the youths.”