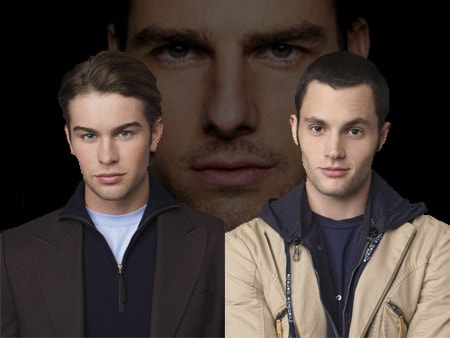 Jealousy between the male Gossip Girl stars apparently flared at the Met’s Costume Institute Ball when Tom Cruise showered all his attention on Crawford, the Daily News reports:

“The problem? Audiences have gone gaga for Chace. The girls and the gays alike have brought the buzz his way, thanks to smoldering good looks and boyish charm. ‘Penn was supposed to be the show’s break-out star and now it is obviously Chace, and Penn doesn’t like it,’ said one insider. In last week’s episode, Chace got no screen time at all while Penn was featured prominently. But jealousy still reared its head Monday night at the Met’s Costume Institute ball. Both Penn and Chace walked the red carpet, but it was Chace who was mobbed – and (OMG) invited to George Clooney’s after-party at Bungalow 8. To make matters worse, the king and queen of Hollywood, Tom Cruise and Katie Holmes, gushed all over him. ‘Tom and Katie went up to Chace to say how much they love him and the show. They didn’t talk to any of the other cast members,’ our spy snitched. ‘Penn didn’t get any love.'”