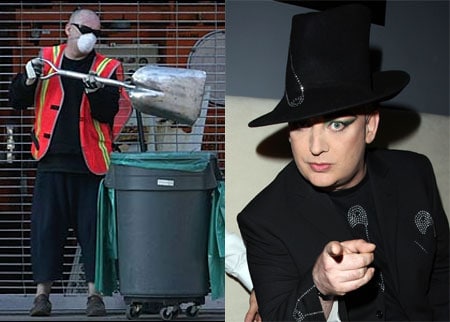 Boy George yesterday announced he’ll perform a free August 17th concert for workers at New York City’s Department of Sanitation, with whom he was sentenced to work following his 2005 arrest for cocaine possession.

George released a statement through his publicist: “The people I worked alongside showed great kindness to me at a very difficult time, and I wanted to thank them all in a way that would show my appreciation”

George turns 47 on Saturday. He’ll be touring the U.S. this summer.

The shot above right, is from last night’s opening of thee RS lounge in London, where he DJ’ed. More on that at Popbytes.

And as a bonus to yesterday’s 1984 vintage Madonna clip, check out the clip of a Boy George look-alike contest in Sydney, from the same year, AFTER THE JUMP…