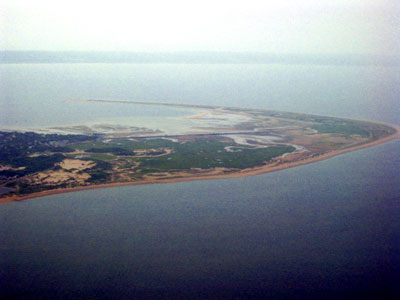 The Cape Cod National Seashore is teaming up with local officials this summer for a “public education” approach to a soaring number of citations for debauchery in Cape Cod’s dunes:

“An example of the complaints was a call reporting Wednesday that a 65- to 70-year-old man was flashing people at Herring Cove Beach, according to Seashore records. In a Sept. 19, 2007, letter, a New Jersey family walking with children in the dunes encountered ‘several couples and then a large group of men having group sex in the nude, including oral and anal sex right out in the open.’ In an August 2007 letter, a whale-watch boat captain leaving Provincetown Harbor with passengers reported seeing 20 to 30 nude men ‘playing around’ near Wood End Lighthouse. Other complaints describe Seashore visitors encountering public sex acts at Head of the Meadow Beach in North Truro and near a Seashore building off North Pamet Road in Truro.”

Said new Provincetown police chief Jeff Jaran: “It’s not acceptable, decent, moral behavior. There is a time to be discreet, and there are places to go and do those types of things.”