Barack Obama and Hillary Clinton made a much-anticipated joint appearance today at a rousing event in Unity, NH. 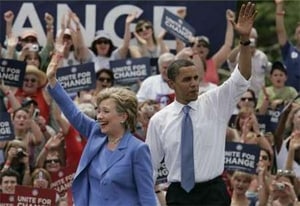 Said Clinton: “We are one party, we are one America, and we are not going to rest until we take back our country and put it once again on the path to peace, prosperity, and progress in the 21st century….To anyone who voted for me and is now considering not voting or voting for Sen. (John) McCain, I strongly urge you to reconsider.”

Said Obama: “I want to start by saying a few words about the woman you just heard from. For sixteen months, Senator Clinton and I have shared the stage as rivals. But today, I couldn’t be happier and more honored that we’re sharing it as allies in the effort to bring this country a new and better day.”

Highlights from the event, courtesy of Talking Points Memo, AFTER THE JUMP…