Two men, one of whom was a worker for Equality Arizona, were assaulted outside a Pita Pit restaurant in downtown Flagstaff, Arizona following the city’s “Pride in the Pines” festival. The attackers preceded their attack with anti-gay slurs, according to the Arizona Republic: 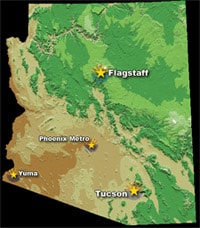 “Authorities found four suspects and took them into custody after interviewing them. The four suspects were: Travis Reiner, 24, of Flagstaff; Christopher Rose, 26, of Englewood, Colo.; Michael Van Roteyn, 24, of Flagstaff; and Mark Greinke, 25, of Sun City. The four suspects could face charges of aggravated assault, assault and disorderly conduct, and they could also be charged under hate crimes statutes, police said. According to a statement from Equality Arizona – an advocacy organization for lesbian, gay, bisexual and transgender people – one of the injured, Michel Brown, was unconscious and bleeding after the attack. At the time of the attack, the injured person waiting for a cab alongside staff and volunteers from Equality Arizona, the statement said.”

Said Barbara McCullough-Jones, the Executive Director of Equality Arizona: “On a day when all of Flagstaff should have been celebrating and embracing diversity, this brutal attack has reminded us all that there is still much work to be done to prevent anti-gay bias from escalating into violence.”