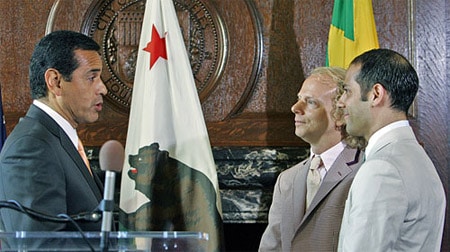 Los Angeles Mayor Antonio Villaraigosa officiated his first same-sex marriage yesterday, between American Beauty producer Bruce Cohen and his partner of five years, Gabriel Catone. The L.A. Times reports that while Villaraigosa is the latest political figure “gambling that championing same-sex marriage will not come at a political cost,” the ceremony did not go without controversy:

“Moments after the champagne was poured, a woman who introduced herself as the ‘Angel of the Trinity’ strode up to the podium to denounce the ceremony and call Villaraigosa an ‘adulterer’ — a reference to his extramarital affair with a television reporter. ‘I don’t believe that gay marriage is morally right,’ said Rosalyn Schultz of Hesperia, moments after the mayor shooed her away from the lectern. Schultz went on to warn that such unions would invite earthquakes, hurricanes and tornadoes. Producer Bruce Cohen, one of the grooms, said the interruption ‘added spice’ to the ceremony. ‘It doesn’t spoil our day. It doesn’t take away our joy,’ he told City News Service. ‘And it certainly doesn’t change the fact that we are legally married in the state of California.'”