Stephen Scott, the victim of a gang gaybashing who inspired Northern Irish DUP MP Iris Robinson to publicly advise gays to seek therapy to “turn (them) around” from homosexuality, has spoken out about Robinson: 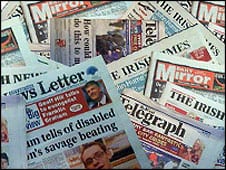 The BBC reports: “‘I certainly will not rest until she stands down for what she’s done, because she’s made my life hell since her comments,’ he said. He said he had struggled with coming to terms with being homosexual, something made more difficult by his background. ‘I took an overdose last November because I was finding it hard to cope with being gay – I had no support from anyone and felt on my own,’ he said. ‘I had always denied it but now I’m out and I’m not ashamed to say I’m gay.'”

That clip, again, if you missed it, is AFTER THE JUMP…