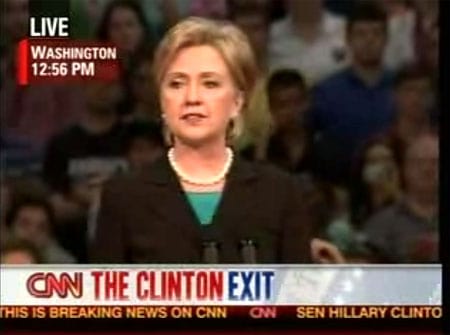 Here’s Clinton’s gracious and optimistic concession speech if you missed it on Saturday, AFTER THE JUMP. Here’s the transcript.

Said Clinton: “I entered this race because I have an old-fashioned conviction that public service is about helping people solve their problems and live their dreams. I’ve had every opportunity and blessing in my own life, and I want the same for all Americans. And until that day comes, you’ll always find me on the front lines of democracy, fighting for the future. The way to continue our fight now, to accomplish the goals for which we stand is to take our energy, our passion, our strength, and do all we can to help elect Barack Obama, the next president of the United States. Today, as I suspend my campaign, I congratulate him on the victory he has won and the extraordinary race he has run. I endorse him and throw my full support behind him. And I ask all of you to join me in working as hard for Barack Obama as you have for me.”

The Wall Street Journal today wonders whether Clinton backers are ready to take her lead and throw their support behind Obama. Let’s hope so.

And the NY Daily News sees a new push for Clinton as VP on the Sunday talk shows with Feinstein and Rangel saying she’d be the best pick.

Watch Clinton’s speech, AFTER THE JUMP…

Previous Post: « You Voted – the Results of Our NewNowNext Award
Next Post: The Democratic Primary Season in 8 1/2 Minutes »