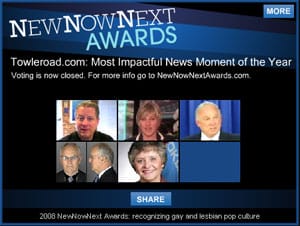 You may have caught the NewNowNext awards Saturday night on LOGO. If not, you can catch the entire show here. You may also remember we were giving an award in conjunction with the show for “Most Impactful (video) News Moment of the Year”.

The nominees were Jerry Sanders for his turnaround on same-sex marriage, Al Gore for his video on gay rights, Ellen DeGeneres’ statement on Lawrence King, Larry Craig and his gay denial press conference, and Sally Kern’s infamous gay-terrorist rant.

The winner, AFTER THE JUMP…

Check out the rest of the NewNowNext awards here!