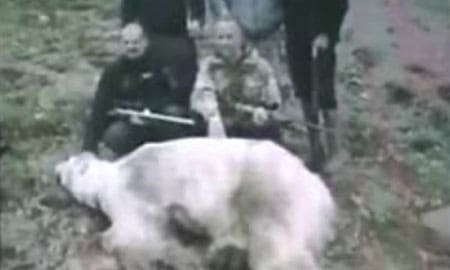 This is so sad.

A Polar Bear that swam 200 miles from either Greenland or a “distant chunk of Arctic ice” finally reached land in Iceland, where it was shot by a group of police, They said they were afraid it posed a threat to humans but couldn’t wait 24 hours for a “correct tranquilizer” to be flown in.

Actually: “Sveinbjarnardottir’s account was disputed by the chief vet in the town of Blönduó, Egill Steingrímsson, who said he had the drugs necessary to immobilise the bear in the boot of his car. ‘If the narcotics gun would have been sent by plane, it would have arrived within an hour,’ he said. ‘They could keep tabs on the bear for that long.'”

And then the pigs posed smugly behind it like some kind of trophy — a starving, exhausted, (not to mention endangered) animal whose life had just ended by their rifles.