At the beginning of the month I posted about a lost, starving Polar Bear that had been shot by police in Iceland after it had swam 200 miles from Greenland or the nearest chunk of Arctic ice. They said they were afraid it posed a threat to humans but couldn’t wait 24 hours for a “correct tranquilizer” to be flown in. Their excuse was disputed by a local veet who said he could have had the proper tranquilizer flown in in about an hour. 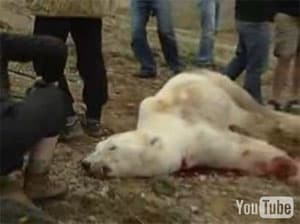 Well, another Polar Bear turned up. They shot and killed it again. What was their excuse this time?

“The chief veterinarian from the Copenhagen zoo had been flown in late Tuesday to help. The police ‘tried to get close to (the bear) with our vet, but they did not get close enough to shoot it with the anaesthetiser,’ zoo spokesman Bengt Holst told AFP. ‘Then the bear started running, so the police were frightened they would lose control. The bear could run very close to the populated area, so they decided to shoot it,’ he added. Holst said he believed Icelandic authorities had made the right decision. ‘It was a security problem,’ he said.”

I wonder if they posed smugly with their trophy again?

A news report on the first bear, AFTER THE JUMP…